The Case for a “Corporate Tithe”

You are here: Home » The Case for a “Corporate Tithe”

The Case for a “Corporate Tithe”
A unique organizational hybrid of for profit
and not-for-profit. Growth does good…

The founders of Civicom laid out a networthy model for entrepreneurs wishing to support the less fortunate while also pursuing business success. Ten percent of the company’s founding stock (a tithe of sorts — see inset) was pledge, a terrific humanitarian and relief organization committed to supporting people in need and attacking the root cause of poverty.

Many people are familiar with the idea of tithing — it is a principle common to several faiths. The suggested giving amount of 10% was set forth as a wise mechanism for supporting the poor (see more below), and it is held that if you give, it comes back, perhaps in financial terms but maybe in other, more important ways.

The corporate tithe is the application of this principle, which is typically associated with individuals, or people — to a corporation.

Updating the tithe to today’s world of commerce is something every entreprenuer should do. In addition to helping worthy causes, the economic case is irrefutable. If you find this hard to believe, so was the original faith principle. Read on.

The first reason is the (only obvious one — people seeing others do good, tend to want to respond positively if possible. If those who share a cause support each other’s undertakings, they will succeed beyond what would happen without the support. By putting the good side of human nature to work on behalf of your venture you can harness the enduring notion: “If you do good things, good things happen.”

You’re still have to work hard and deliver excellence at a fair price. Making a corporate tithe commitment is not like turning on a faucet of business, but it can help generate sales by (a) opening doors that might otherwise be closed, and (b) acting as a tie-breaker in your favor in parity selling situations. Anyone who has sold in the trenches knows this covers a lot of ground.

Second, people commit most when they have an elevated sense of purpose. We all want to be part of something special — something that takes us beyond ourselves, the next paycheck, or promotion. Mission statements are a start, but mom and credos tend to look alike, and they hardly inspire after years of cynical Dilbert Jokes. By embedding a social enterprise component into the DNA of your company, you credibly set it apart. Your mission statement can take on a unique and genuine tone that truly can elevate the sense of purpose.

Pledging 10% of a company’s stock to a non-profit is in a different class from most “cause-marketing” programs. It creates a unique hybrid — a third option, if you will — an organization somewhere between purely for profit and not-for-profit. It is not a promotion or a corporate donation; it becomes part of who you are — part of the root structure of the tree you are growing. This elevates standards and the sense of purpose and responsibility throughout the organization. It also gives the leader a strengthened belief that the forces of good will are allied in the endeavour. There is no better time thank during the stressful days of a startup to tap into the oft repeated covenant that those who tithe will be rewarded.

Third, since it is a stock pledge, the price to the customer is not raised to support a charity as is often the case with revenue-sharing models, nor is the ongoing return to shareholders reduced as with profit-sharing models. (The tradeoff is that it is a longer-term proposition. The advantages offset this.)

Fourth, it is, counter-intuitively, easier in some ways to give at the starting gate when the value is more abstract, than after the value is created.

Most entrepreneurs think: “I’ll make my money first and then decide how much to give away.” But if you are going to give, why not do it up front, so people can respond with their support and thus increase the value of what was given — maybe by a lot. So wait a minute – the “first fruits” idea may make business sense, too?

Fifth, the alliance of a non-profit and a commercial enterprise can enable mutually supportive activities no possible for either organization alone, including knowledge and point-of-view exchange, scale, and brand enhancement. Sometimes a cross-sector partner can more credibly speak about the other than when promotion is purely in self-interest.

Lastly, consider the breakeven economics. The recommended structure is an “irrevocable pledge” in which stock transfers to the non-profit at a future date. If the stock value appreciates significantly during this time, the tax benefit could offset a good portion of the initial pledge. This, combined with expected value considerations, brings the increase needed to break even well below 10% — let’s say to 6%.

The average American gives about 3% to charitable causes; let’s say you would, as a successful entrepreneur, give away 4% of the value created in your venture. This means the value increase need only be 2% or more to make the up-front pledge model pay back (the difference between the 4% you would give anyway, and the 6% required for break-even).

It is a no-brainer. No rational entrepreneur or investor would argue that all of the factors listed above combined would not add at least 2% to the value of a new venture. And then there’s the “gravy” – the long-term value of support of good causes. Some gravy.

Economists typically caution against corporate philanthropy on the basis that it amounts to management choosing charitable causes for the shareholders. More appropriately, they assert, management should maximize returns and leave donation decisions to shareholders. The pledge model reverses the paradigm. Founding shareholders do make the decisions — up front. The very act of giving can then come back on itself when others respond, increasing the value of what was given.

Why would an entrepreneur not do this?

Importantly, (a) the financial scale of serious poverty around the world is minuscule compared with the value created in corporations each year, and (b) every business without exception was once a new venture. The corporate tithe is the way to get corporations engaged in the long run. If a modest number of successful entrepreneurs were to follow this model, the problems of poverty and hunger would be substantially diminished in a matter of a few generations. This is an idea worthy of support. Actually, this is the idea of the tithe, updated to today’s reality. 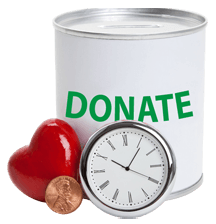 Tithing is a principle common to Christianity, Judaism, Islam, and several other faiths, to give (at least) 10% of “what our fields produce… “The covenant says when you give, it will come back — perhaps in financial terms but maybe in other, more important ways. The tithe was set forth as a simple but wise mechanism for supporting the poor and the clergy in a former time when most workers were involved in agrarian activities. Since most of us no longer grow crops and livestock, the commonly adopted modern-day translation is that of giving 10% of one’s income. This is of course good in itself, but for an entrepreneur, an up-front stock pledge is a worthy supplement because in addition to helping worthy causes, it also makes your organization better and increases the likelihood of success (see above). An entrepreneur’s stock value appreciation augments and often significantly exceeds the salary earned while creating that value. The challenge was not to give 10% of the value created in our fields. Stock is in fact a representation of the value created in one’s firm, or “field.”